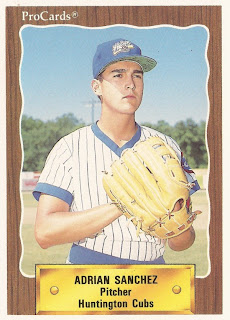 Adrian Sanchez' interest in the game of baseball started out at a young age growing up in New Mexico, he told Huntington team officials for his ProCards card back in 1990.

"I started playing baseball in the Pee-Wee division when I was five," Sanchez was quoted as saying. "When I played in high school and got to start, I became determined to play pro."

When Sanchez was in high school, he was also good enough to turn pro. He was good enough for the Cubs to select him in the seventh round of the draft, directly out of Rio Grande High School in Albuquerque.

But, while he was good enough to fulfill his dream of turning pro, Sanchez was never good enough to make the ultimate dream, the majors. He played just four seasons in the minors, never making it to AA.

Sanchez' career began that year in 1990 with his selection by the Cubs. After signing, he was assigned to rookie Huntington in the Appalachian League.

With Huntington, the starter Sanchez started 13 games. He also began slowly, according to The Portsmouth Daily Times. By mid-July, his ERA was over nine. But he use two good outings, including a shutout, to drop that 3.5 points. By seasons' end, his record stood at 3-7, with a 5.35 ERA.

For 1991, Sanchez returned to Huntington, this time going 5-5 over 14 starts. His ERA dropped to 3.10. In early August, he threw a one-hitter, facing the minimum number of batters, according to The Daily Times.