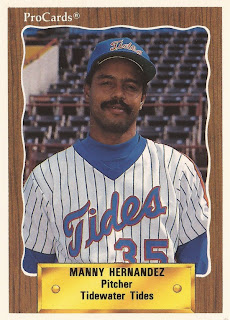 It took Manny Hernandez into his eighth professional season to make the majors leagues, but when he made it, he made the most of it.

In his first two starts, the Dominican right-hander went into the sixth inning, only giving up a run in each outing.

"I'm so happy," Hernandez told reporters after his second outing," I've been waiting since 1979 to pitch in the big leagues. My dream has come true."

Hernandez went on pitch in nine games for the Astros that year and, in a career that spanned 13 professional seasons, he would see time in two more big league campaigns.

Hernandez' career began in 1978, signed by the Astros as a free agent out of his native Dominican Republic.

Hernandez played his first two seasons in the rookie Gulf Coast League, posting a combined record of 7-2 in 20 outings. He played his next three seasons at single-A Daytona Beach. His final year there, he went 10-3, with a 2.99 ERA.

For 1984, Hernandez made the jump to AAA Tucson, where he would play for the next five seasons.

It was in 1986 that Hernandez made the jump to Houston, debuting June 5 with a 5.2-inning effort. Despite giving up just a single run, Hernandez ended up taking the loss.

In his second start, a week later, Hernandez again went 5.2 innings while giving up a single run. This time, he got the win.

After the win, Hernandez thought back to surgery he'd had on his shoulder a year before, and how he'd made it back, according to UPI.

"A year ago, the major leagues seemed a million miles away," Hernandez told UPI.

But there were still lessons to learn. In his third start, Hernandez gave up a two-run single to the opposing pitcher. Hernandez went six innings, giving up five runs, though two were earned.

"(Hernandez) has got to remember to bear down and get the pitcher out," Hernandez' manager Hal Lanier told The Associated Press later. "It cost him two runs."

In nine total outings for the Astros that year, four starts, Hernandez went 2-3, with a 3.90 ERA. He returned to Houston for six more outings, three starts, going 0-4.

After a season spent back at Tucson, Hernandez signed with the Twins at AAA Portland, then was sent mid-1989 to the Mets. With the Mets in September 1989, Hernandez got his final time in the majors, a single inning of work.

Hernandez played two more seasons in the minors, at AAA Tidewater and with the Brewers at AAA Denver, ending his career after 13 seasons and with 16 total outings in the majors.