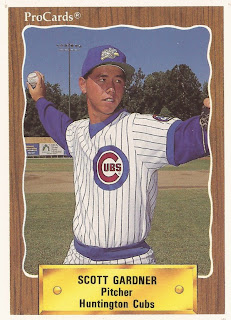 By 1990, Scott Gardner had been playing baseball for a dozen years, starting as a kid.

His hopes were, he told team officials for his 1990 ProCards card back, was to be playing for a lot longer.

"I started playing baseball at age 7," Gardner said, according to his card back. "Every year I made the All-Star team. I want to achieve major league status. Also, get married and have kids."

Gardner was going into his first season as a pro that year at rookie Huntington. He went on to play in six more professional seasons. He never made the majors, but the pitcher did have a hand in a no-hitter.

Gardner's pro career began as he was taken that June by the Cubs in the 14th round, out of Imperial Valley College in California.

With Huntington, Gardner got into 13 games, four starts, posting a 1.87 ERA. He went 3-2, with two saves. Early in the year, Gardner suffered a shoulder injury. He came back with a five-inning, no-run performance. He also picked up a late-August win, going six innings.

For 1991, Gardner returned to Huntington, also getting time at single-A Peoria. He got only 10 starts on the year. In 1992, he played exclusively at short-season Genevia, getting another 10 outings.

In 1993, Gardner got a full year in, 39 outings back at Peoria. He went 5-6, with a 5.40 ERA in 30 relief appearances, nine starts. It was that April that Gardner had a hand in his no-hitter, combining with another hurler for a 7-inning variety.

Gardner isn't credited as playing in 1994, but he returned in 1995 with the Tigers at single-A Fayetteville and high-A Lakeland. Between them, he had a 2.15 ERA. With Fayetteville, Gardner picked up four saves, including one in late April.

Gardner played in two more seasons, both in the Brewers system. In his final season, 1997, Gardner got 29 outings at AA El Paso and one at AAA Tucson, ending his career.

Gardner has since moved to Indiana, working in finance in the automotive industry, according to his LinkedIn profile.