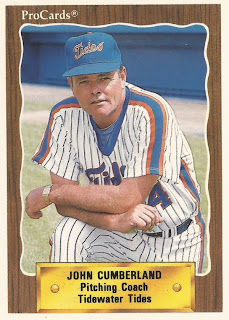 The weather wasn't the best that night, but John Cumberland didn't care.

Called on in the third inning of a 5-5 game, Cumberland finished out the game, giving up one unearned run on four hits in 6.1 innings. The Yankees won 11-6, for Cumberland's first major league win.

"I thought it was a comfortable night to pitch," Cumberland said after the April 23, 1970, game in an Associated Press account. The Portland, Me., native wasn't phased by the weather. "I played in an inch of snow in Maine. We had to shovel the snow off the field to play."

In parts of six major league seasons, Cumberland went 15-16 in both starting and relief work. It was also a career that saw the future pitching coach upend a future Hall of Famer.

In one June 22, 1971 outing, with the Giants, Cumberland went toe-to-toe with Ferguson Jenkins, going 8.2 innings and coming out on top of a 2-0 score.

He played his final pro game in 1974 with the Angels. It was in 1985 that he took the pitching coach job with the AAA Tidewater Tides, a position he would hold through 1990.

During the brief regular spring training, Cumberland watched the ace of his staff Roger Clemens give up a home run on the first pitch. "That's OK," Cumberland told The Providence Journal, "It doesn't bother me. I'm sure it didn't bother him."

Clemens struggled early that season. "Nobody goes out there all the time with his best stuff," Cumberland told The AP after Clemens was pulled from a July start. "He's going to be just fine."

Cumberland would be pulled himself a couple days later, put on a leave of absence, with Al Nipper taking over the duties.

Cumberland returned to the Red Sox system for 1996, serving as AAA Pawtucket pitching coach through 1998, then back to Boston as the Red Sox bullpen coach from 1999-2001.

In 2002, Cumberland started the year in the same job, but with the Royals' AAA club in Omaha. Mid-season, it was Cumberland who took Nipper's job, as he was named Kansas City's pitching coach. Cumberland saw the Royals off to a 9-0 start in 2003, as Cumberland stressed throwing first-pitch strikes.

"It was a very tough decision," Royals Manager Tony Pena told MLB.com. "It was an executive decision. It had nothing to do with the way John Cumberland worked. He worked very hard.

"He is a great man. I cannot ask him to do any more than he did," Pena added to MLB.com. "Sometimes executives have to make decisions and you have to respect those decisions."