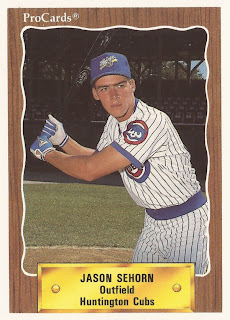 Like many of his teammates that year at rookie Huntington, Jason Sehorn looked forward to the bigs.

"My goals are similar to everyone else's," Sehorn is quoted as saying on his card back. "I want to make it to the big leagues and to graduate from college."

Sehorn made it in football, after returning to college. He then spent a decade in the game on defense, at cornerback. Nine of those seasons he played with the New York Giants and one with the Rams.

With the Giants, Sehorn was known for spectacular defense, coming back from injuries and one legendary play on the Giants' run to the 2001 Super Bowl.

That legendary play was an improbable interception that Sehorn ran back for an Eagles-deflating touchdown that helped send New York to the 2001 NFC championship game.

Sehorn's professional baseball career began and ended in 1990, signed by the Cubs as a free agent out of his native California.

With the Cubs, Sehorn played at rookie Huntington, hitting a paltry .184 over 49 games, with a single home run. He scored the winning run in an early July game and knocked in a run in an August game.

Sehorn signed with the Cubs after a summer of American Legion ball. He hit well enough for the Cubs to give him $40,000, according to Sports Illustrated. After that year at Huntington though, Sehorn went in a different direction.

"Defense is the hardest thing in the world," Sehorn told SI. "If you drop the ball as a receiver, you still have two more plays. When a defensive back makes a mistake, that's seven points on the board. The worst part is I have to run backward as fast as my opponent is running forward—and he knows where he's going."

Sehorn played well enough at USC to get the notice of the pros, enough to become a high draft pick. Sehorn was selected by the Giants in 1994 in the second round, 59th overall.

''If you just watch Jason or you're around Jason, he doesn't show a great amount of what you might feel would make him step on the field and be a very intense player,'' Giants head coach Jim Fassel told The New York Times in November 1997. ''But when the ball is snapped, boy, he goes a hundred miles per hour. I mean, he really, really plays hard."

Going into the next season, Sehorn tore his ACL, missing the entire season. But he came back for 10 games in 1999 before breaking his leg. Then it was 14 games in 2000.

In January 2001, as his Giants prepared to play in the Super Bowl against the Ravens, Sehorn looked back on that injury with The St. Petersburg Times.

Helping the team get to Super Bowl XXXV was Sehorn. In the divisional matchup against Philadelphia, with 1:40 to go in the first half, Sehorn got his hands on pass, tipped it up and caught it, according to an Associated Press account. He then got up and ran the ball back for a momentum-stopping touchdown.

"I have never seen an interception as good as that one," Fassel told The AP after the 20-10 Giants win. "That was tremendous athleticism in making the play, but our defense was strong. I have seen our defense play well at times, but I don't think I've seen our defense take over a game like that."

Sehorn went on to play in three more seasons, two with the Giants and one with the Rams.

He has since moved on to other ventures and just being a dad to three daughters, he told The New York Daily News in 2010. At that point, he and his family had moved to the Charlotte area, from California.

"I didn't have a dad so I know my kids are going to have a father," Sehorn told The Daily News. "They're going to see their dad. He's going to be around. It's just going to be different for them, and I owe that to the fact I was able to play football for 10 years. As much as I can harp on the way the game is going now in the NFL, it's allowed me a great lifestyle to have the freedoms to do these things."