Note: Thanks to @JasonSehorn for taking the time to share his story 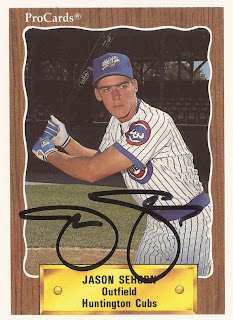 Jason Sehorn watched for his name. The USC safety then saw it, crawling across the screen on ESPN as the 59th overall pick in the 1994 NFL draft.

Soon, also, his phone started ringing. On the other end was his new head coach and his new general manager.

"It was just a very awesome experience," Sehorn recalled recently to The Greatest 21 Days, "to be that 21-year-old kid sitting in your living room and having these head coaches of NFL teams and the GM telling you 'we just drafted you, you're going to be on a plane headed out to New York.'

Nearly five years earlier, Sehorn got another message from another organization. This one wanted him to play another sport, baseball.

In this earlier brush with the pros, ESPN was nowhere in sight. This was Jason Sehorn, his American Legion team and a scout for the Chicago Cubs.

"A scout just happened to be driving through and saw me play," Sehorn explained. "He saw me run and asked me if I wanted to play minor league baseball. And I was like, 'yeah, let's go.'"
Both entrances into professional ball came with Sehorn's regular enthusiasm. But only one was in the sport he really wanted to play. And, in that sport he wanted to play, Sehorn ended up playing for a decade, and becoming a star.

Sehorn spoke with The Greatest 21 Days by phone recently from Connecticut, where he was readying for his third season as a college football analyst for ESPNU.

Sehorn spoke about his time growing up in California playing multiple sports but not so much in an organized way. He also described how he got into baseball, a game he never played in high school, but got into in American Legion ball on the invitation from some friends.

Sehorn spoke about getting spotted by that scout, and ending up spending a summer in West Virginia, playing for the Cubs' rookie-league affiliate near the banks of the Ohio River in Huntington, home to Marshall University.

Sehorn then talked about his football career, his return to college and his rise from junior college to the University of Southern California and then the New York Giants. From there, he spoke about coming back from injury, and one legendary interception in the 2001 NFL playoffs.

Sehorn grew up in Northern California, in the city of Mount Shasta. As a kid, Sehorn recalled never thinking about professional sports, or even organized ones. He was just a kid playing and running around.

"I wasn't really big into organized team sports," Sehorn said. "It wasn't something that I wanted to do."

"As I got bigger, faster and older, I got interested in those things."

Sehorn recalled basketball as actually being the sport that was the most fun. But, 6-foot-3-inch guards are a dime a dozen. At Mount Shasta High School, Sehorn never played baseball, but he did play a season a football.

Then, after high school, some friends went out to play the summer of 1989 in American Legion ball. And they invited Sehorn to go with them. Despite having never played before, Sehorn agreed.

Sehorn hadn't really been a fan of the game because it seemed to move so slowly, and there were so many games, he recalled. What did appeal to him, though, was the camaraderie.

"That's kind of what hooked me in," Sehorn recalled. "Spending the summer with my buddies, traveling around playing baseball games? Yeah, sure, let's go."
"So I played with a bunch of friends out of high school and we had a good time," Sehorn added. "It was a good summer."

Soon, Sehorn realized a scout was watching. It was about halfway through the season, he recalled, and the scout stopped by for a three-game series.

He then came back.

"I was like, 'Wow, he's coming back for seconds here,'" Sehorn recalled. "Then I realized this might work out."

Eventually, talked turned to a contract. The scout wanted Sehorn to go play for the Chicago Cubs organization and try for a shot at playing in Wrigley Field.

With that, Sehorn was a baseball player, putting off school to play baseball as a professional.

Sehorn played that fall in instructional ball in Arizona. The next summer, it was off to West Virginia.

But there was also a lot for him to learn, Sehorn recalled.

"But to understand what a curve ball, a sinker, a slider looked like, what's a forkball and understand and recognize - that just takes time," Sehorn added, "and I got to be honest, I just wasn't really dialed into doing it. I was more or less ready to go play football because that was fun. That was running around, hitting people, catching balls.

"I didn't have to sit there and identify a curve ball from a slider."

Sehorn ended up not sitting there for long. He played just a single season in the Cubs' system. Then it was back to college and back to football.