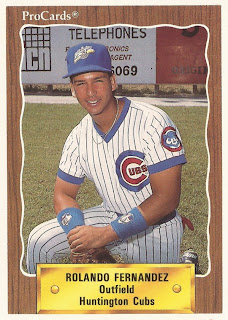 Finding a good player in Latin America, Rolando Fernandez told ESPN.com in 2008, involves more than just spotting a player. There's much work after that.

"There's a concept that the players play a lot of baseball in the Dominican before they sign," Fernandez told ESPN.com. "But they don't play a lot of organized baseball, so once you sign them and get them in the complex, that's when the teaching starts."

Fernandez spoke to ESPN.com as the Rockies' director of international operations, a job he continues in 2013. Fernandez is continuing a career as a scout and coach that has lasted for nearly two decades.

Fernandez went on to that career after a career as a player in the Cubs system. That playing career, though, lasted just three seasons, Fernandez never seeing AA.

A native of Puerto Rico, Fernandez' career in baseball began in 1990, taken by the Cubs in the 45th round of the draft, out of New Mexico State University.

With the Cubs, Fernandez started at rookie Huntington, hitting .252 over 47 games. He hit four home runs, one of them a two-run shot in mid-August.

By 1994, Fernandez was with the Rockies, as a coach in rookie ball. Fernandez soon turned scout, named in 2000 as the team's director of Latin American operations.