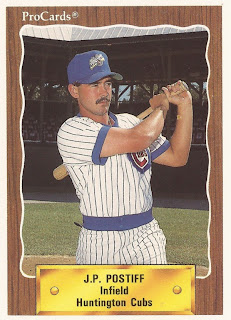 J.P. Postiff was a late-round draft pick in 1990, but he still had faith in his ability, according to the quote on his 1990 ProCards card back.

"I've played at Allan Hancock College and at Fresno State," Postiff is quoted as saying on his card back. "I plan to make it to the majors in a couple of years and I want to finish my degree in criminal law."

Postiff spoke that year as he started his first professional season at rookie Huntington. A couple of years later, he was still in single-A. The year after that was his last year as a pro, Postiff never making his goal of the majors.

Postiff's career began that year in 1990, taken by the Cubs in the 33rd round, out of Fresno State. Postiff is also credited as James Postiff and J.R. Postiff.

With the Cubs, Postiff started at rookie Huntington, hitting .246 over 56 games. He also hit three home runs and stole 10 bases.

For 1991, Postiff split time between high-A Winston-Salem and single-A Peoria, getting just 67 games between them. At Winston-Salem, Postiff hit just .190 over 53 games.

Postiff is credited with one more season, spent back in rookie ball with independent Pocatello. He hit .277, but it was his final year as a pro.