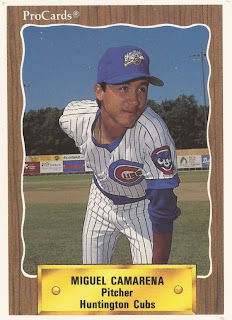 As Miguel Camarena's first professional season started in 1990, he was quoted as saying he looked forward to getting on the field.

"I'm excited about playing in Huntington because this is a new experience," Camarena was quoted as saying on his ProCards card back. "I'm looking forward to it. I've been playing baseball since I was five."

For Camarena, his career would ultimately be confined to Huntington. He played two seasons, never getting out of rookie ball.

Camarena's career began that year in 1990, signed by the Cubs as an amateur free agent out of his native Deming, NM.

For his first season, Camarena pitched in 13 games for Huntington, all of them in relief. He also saved two games. His ERA was 3.18

For 1991, Camarena returned to Huntington, getting into 16 games in relief, also picking up two saves with a 3.43 ERA.

Camarena picked up his second save of 1991 in mid-July. That save was also Camarena's last as a pro, his career ending with season's end.