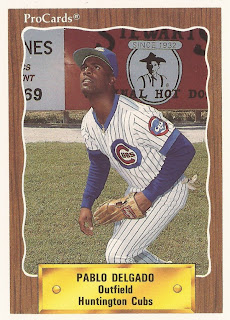 Pablo Delgado appeared ready to show in 1990 that the Cubs could count him as an asset from a trade less than two years earlier.

"I feel I'm getting over my shoulder and elbow injuries," Delgado is quoted as saying on his ProCards card back. "I think I'm ready to go. I want to be an outstanding defensive center fielder and hit well."

Delgado was one of two players-to-be-named-later in the December 1988 trade that sent Rafael Palmeiro and Jamie Moyer to the Rangers. Delgado, though, would never see the majors, or even single-A. That 1990 season at Huntington was his last full-time in the minors.

Delgado's career began in 1988, signed by the Rangers as an undrafted free agent out of his native Puerto Rico.

With the Rangers, he played the year in the rookie Gulf Coast League, getting into 36 games, but hitting just .198.

That December is when he was thrown into the Palmeiro-Moyer deal. The Rangers got those two and a third player in exchange for Mitch Williams, Paul Kilgus, Curtis Wilkerson and three others, one of the others being Delgado.

Going into spring 1989, Delgado was "considered a legitimate prospect," according to the Newspaper Enterprise Association. The same article also picked the Cubs to finish last in the 1989 National League East race.

Delgado, though, is credited with just 13 games that year at short-season Geneva. He hit .139, apparently bothered by those arm injuries.