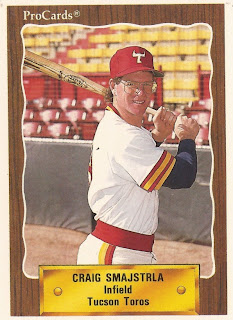 Years after his playing career ended, Craig Smajstrla looked back on his time as a pro, including all of eight games played as a September call-up with his hometown Astros in 1988.

Smajstrla played those games in the Astrodome with the likes of Nolan Ryan, Ken Caminiti and Craig Biggio, he told The San Angelo Standard-Times in 2008.

"I wasn't quite good enough to stick," Smajstrla told The Standard-Times. "When I graduated from high school I was 5-foot-7 and 140 pounds. Scouts usually don't look at somebody that small. I went as far as I could (as a player), let's put it that way."

As far as Smajstrla could go meant 11 seasons as a pro, spent with four organizations. He also got those eight games with the Astros, as a major leaguer.

That career has now taken him to a long post-playing career as a scout, working for the Major League Scouting Bureau.

Smajstrla's career began in 1981, taken by the White Sox in the fourth round, out of Pearland High School in Texas. He started that first year in rookie ball, in the Gulf Coast League.

He made AA Glens Falls by 1984, hitting .264 with four home runs for the Eastern League team. In April, Smajstrla hit a double and a triple in one game, batting in two runs.

Smajstrla remained at AA in 1985, traded mid-season to the Indians. In 1986, Smajstrla made AAA for the first time, at Maine. In July, Smajstrla notched four hits and four RBIs in a game against Syracuse.

After spending 1987 back at AAA with the Indians, Smajstrla signed for 1988 with the Astros. He played the season at AAA Tucson, before being called up to Houston in September.

Smajstrla got into eight games with the Astros, getting to the plate three times. He didn't get a hit, but he did score two runs. He scored the winning run Sept. 9 against San Francisco.

Smajstrla has spent much of his time since, as a scout with the Major League Scouting Bureau. In June 2011, Smajstrla attended the Astros' MLB Urban Youth Academy tryout in Houston.

"Certainly, there were some young kids that grabbed our attention," Smajstrla told MLB.com. "Some could run, some swung the bat well. They showed enough tools that, hey, we know who they are, we got their name, we have their information."