Wayne Cunningham didn't really play baseball, but what he did do, came in television 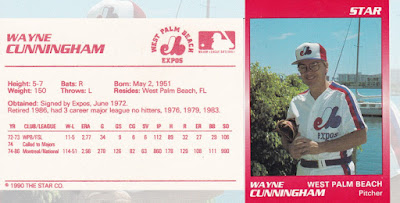 Wayne Cunningham had himself a great career in baseball and on the mound, at least according to his 1990 West Palm Beach Expos card.

If you've never heard of Cunningham's baseball exploits, there's a reason for that. Cunningham, obviously, did none of that. His card appears to be a humorous take on a card for a team announcer or connected to its announcer.

Through information on another West Palm Beach Expos card, that of the properly labeled announcer Pat Murphy, the sports director at West Palm Beach's WPTV, the real Cunningham can be identified as with that station.

Cunningham served there both before and after that season and, specifically, he served as the station's director of creative services in 1988 and 1989 and as its promotions director in 1992.

While Murphy's card identified him as an announcer for West Palm Beach, it remains unclear if Cunningham also served as an announcer or in some other role with the club.

In 1987, Cunningham the station worker appeared with WPTV in a magazine article on local stations responding to the impacts cable was having on the local audience.

"It's not every day he does something like this," Cunningham told The Sun Sentinel of the visit.

In 1992, Cunningham, as the station's promotions director, got picked from 150 station promotion directors as a guest on a Jay Leno test program as Leno prepared to take over The Tonight Show.

By 1997, he was WPTV's marketing and research director and tackling an out-of-market satellite problem sapping his station's viewers, according to The Palm Beach Post.

Cunningham later moved to Iowa, where he served as group marketing manager for Meredith Television Group in Des Moines and as television research group manager for Sinclair Broadcasting.

More recently, Cunningham has served as general manager of Glades Media Radio stations in Okeechobee and on several boards in the area, including the United Way, according to the local Chamber of Commerce's 2016 guide. 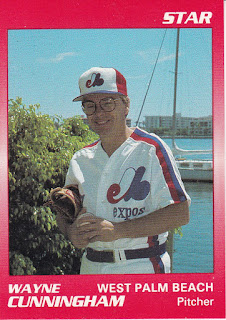