The Mets had an opening at bench coach for 2021 and manager Luis Rojas turned to someone with a good recommendation, Dave Jauss, according to MLB.com.

That recommendation came from Rojas' father, Felipe Alou, whom Jauss coached under at high-A West Palm Beach from 1989 to 1991 and got to know well, MLB.com wrote.

"My father has always told me that Dave Jauss is one of the best coaches he had in his career," Rojas told MLB.com in Spanish via text message in December 2020. "He always said that few things got by [Jauss], and that he helped my father tremendously in his rise as a manager. He has a great ability for reading people and coaching them."

Jauss signed on with the Mets for 2021 after previously serving in the majors as a coach over more than two decades and doing so with five different teams.

His long career in baseball, however, began in college and, even before that, as the son of a Chicago sportswriter.

Jauss' father was sportswriter Bill Jauss, who covered Chicago sports for The Chicago Tribune. The younger Jauss even got to tagalong with his father on sports assignments, including to Wrigley Field, The South Florida Sun Sentinel wrote.

In college, Jauss graduated from the University of Massachusetts Amherst in 1981 with a Masters in sports management. He then started coaching by 1982 at Westfield State College, then Atlanta Christian College.

He moved into the pros for 1988, with the Expos s manager in the rookie Gulf Coast League. He joined Alou in 1989 as coach at West Palm Beach, before taking over himself as manager for 1992.

"It should be a little more interesting offensive club," Jauss told The Palm Beach Post at that season's start. "These guys have better numbers in lower ball but they also have less experience."

After managing at AA Harrisburg in 1994 and going through the Orioles system, Jauss joined the Red Sox in Boston as first base coach in 1997.

Upon being hired in Boston, Red Sox GM Dan Duquette spoke to The Boston Globe about an even higher job Jauss could see in the future, as a major league manager. Duquette knew Jauss going back to Amherst and helped him initially get the Expos job, The Globe wrote.

"That's always been a goal of his," Duquette told The Globe then, "and Dave has generally accomplished his goals. He's got all the skills. He's a real bright guy with great intensity, a good work ethic, and a real knack for on-field leadership."

Jauss hasn't become a major league manager, but he has stuck around in the majors. He stayed in Boston through 2001, then served as bench coach for the Dodgers, Orioles and Mets from 2006 to 2010. He's also managed in winter ball in the Dominican Republic. 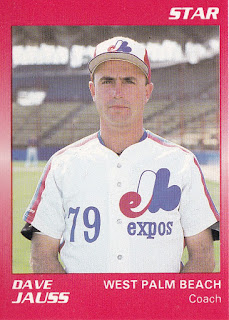