Rich St. John arrived as a trainer for the Indians in the minors with some experience.

He got that experience in college, with the University of Akron.

St. John served as the trainer for the Akron baseball team in 1988, the school where he received his degree in sports Medicine.

St. John arrived in the Indians system in 1989, but his minor league career appears to have been brief. He's listed as a trainer over just two seasons.

Before arriving at Akron, St. John did his undergraduate work at Mt. Vernon Nazarene College in Ohio.

St. John started with the Indians at short-season Watertown.

He then moved on to high-A Reno for 1990, supplied by the Indians. His Reno card indicated he resided in West Milton, Ohio, and that he and his wife enjoyed camping and skiing.

St. John does not appear to have served as a minor league trainer beyond 1990. 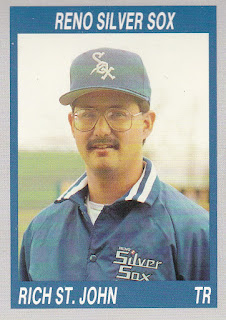