The Reno Silver Sox went on a 10-game skid in July 1990, but a ninth-inning comeback that included a hit by Kaha Wong helped finally bring high-A Reno a victory, The Reno Gazette-Journal wrote.

"There was just no way we were going to lose this one," Wong told The Gazette-Journal. "We just needed to get our stuff together."

Wong helped his club to a win that year in his second season as a pro. That season also turned out to be his last.

Wong, however, has gone on to a long post-playing career as a revered coach in his native Hawaii. He helped develop two prospects in particular, his sons Kolten Wong and Kean Wong.

Kaha's career began in 1989, signed by independent Reno out of the University of Hawaii and USC.

In college, Wong started at USC, but transferred back home to Hawaii-Hilo to work on his fielding after being seen as a designated hitter, according to The Honolulu Advertiser.

Wong then returned home to Hawaii with his family - Kolton was born that October. He also became a youth coach. In August 2006, Wong coached a Cal Ripken team to the Cal Ripken World Series title.

"I trained these kids for three years to come here and beat Mexico," Wong told The Advertiser, expressing pride in his players' accomplishment.

In 2010, son Kolten, playing in the Cape Cod League, spoke to Cape Cod Online about the influence of his father on Kolten's game.

"My dad has worked on my swing since Day One," Kolten Wong told the site. "He also worked on my speed. Those are my strengths – hitting and running. I'm confident I can place the ball where I want. I can bunt, hit-and-run."

Kolten Wong turned pro the next year, taken by the Cardinals 22nd overall. He then debuted in the majors in 2013 and soon became a regular, continuing in 2020. Brother Kean Wong also made the majors, for seven games in 2019. 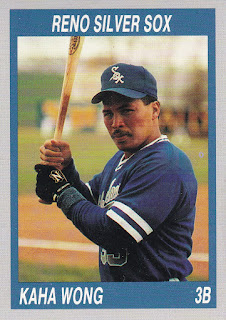