Kevin Foster made switch from infield to pitching, saw bigs over seven seasons; Passed in 2008

Kevin Foster recalled his 1990 switch from infielder to pitcher as simply his manager Felipe Alou asking him if he'd be interested in the move, The Des Moines Register wrote later.

Alou was serious and Foster jumped at the opportunity, The Register wrote.

"Anything to stay in the game," Foster told The Register then.

Foster not only stayed in the game as a pitcher, he went on to make the majors over seven seasons. In one four-season run for the Cubs from 1994 to 1997, he started at least 13 contests and won more than 10 games twice.

Foster's career began in 1987, taken by the Expos in the 29th round of the draft out of Evanston Township High and Kishwaukee College in Illinois.

He started with the Expos in 1988 in the rookie Gulf Coast League and at single-A West Palm Beach. The infielder hit .253 in 53 games.

Foster moved to single-A Rockford for 1989, then to high-A West Palm Beach and to the pitcher's mound for 1990. He pitched that year in the rookie Gulf Coast League and at rookie Gate City. He went 3-7, with a 4.66 ERA overall.

"I had pitched in high school and junior college, so it wasn't completely new to me," Foster told The Sumter Item in July 1991 of the switch. "... It was a tough adjustment at first, but once I got in a groove, everything came back."

Foster saw two games for the Phillies. He gave up 11 earned in 6.2 innings of work. He then landed with the Cubs to start 1994, traded for Shawn Boskie, and Foster found a home.

In June 1997, Foster started the first official game of the Cubs-White Sox series. He went six innings, gave up three earned and got the win.

"This is a special win, not only for me and the ballclub, but for the Chicago Cubs organization," Foster told The Chicago Tribune. "This is a big series as far as bragging rights."

Foster saw only three outings in 1998, then injury hit. He didn't return to the majors until 2001, with the Rangers. He saw nine relief outings then to end his big league career.

He then continued in independent ball for three more seasons, last playing in 2004 for St. Paul.

After his passing in October 2008 from renal cell carcinoma, Foster's brother Mark Foster recalled how the Chicago-area native realized his dream of playing for the Cubs.

"Kev was just a nice, humble kid," Mark Foster told The Tribune. "Just a regular guy. It was like a dream for him when he got to play for the Cubs. ... "But he never got starry-eyed. He'd just come home after playing in a game, just the same as he did when he played in high school. Everything was just normal to him." 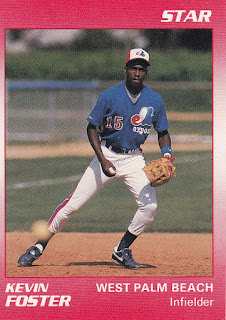