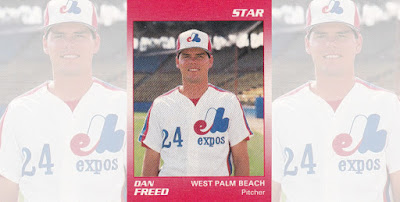 Dan Freed started strong for the Expos at short-season Jamestown in 1988, 4-0, with an ERA of just 0.61, his hometown Bloomington Pantagraph wrote.

Freed called himself extremely pleased with his start, The Pantagraph wrote.

"I've done about as well as I can expect," Freed told The Pantagraph. "I've been pitching the same as I did in college and it's been working pretty well."

Freed went on to go 13-1 over 15 starts that year at Jamestown, with a 0.67 ERA. Despite the strong start, though, he played in four more seasons. He made AA, but didn't make it higher.

Freed's career began that year in 1988, taken by the Expos in the 17th round of the draft out of Illinois State.

He made high-A West Palm Beach for 1990 and went 12-8 there, with a 2.00 ERA. That September, he spoke to The Pantograph about his progress.

"This was going to be the summer I decide if I keep playing or not," Freed told The Pantagraph. "This year really didn't tell me a whole lot. They say the big step is from Class A to AA. When I pitch at (AA) Jacksonville, then I'll know if I can pitch in the majors."

In January 1995, Freed started a new job with the Expos, as a scout.

"There's a lot of projection involved (in scouting)," Freed told The Pantagraph then. "But I played with a lot of people who are in the major leagues now and I played a lot of years in the minors. Hopefully, I have the ability to tell if someone can play baseball or not."

Freed continued as a scout in 2004 with the Dodgers. In 2010, the Yankees named him a team scout. 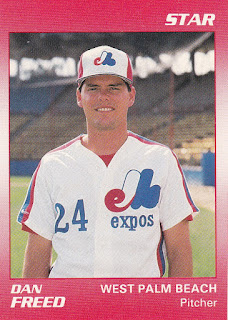