Chris Rogaliner joined the Niagara Falls Rapids as trainer in 1990 while still in school, according to his 1990 card back.

Rogaliner was majoring in athletic training and health education at Ohio University, the card reads.

Though he came from a school with an athletic training history dating back 18 years, Rogaliner does not appear to have continued as a trainer, at least in minor league baseball.

He joined the Tigers system as trainer at Niagara Falls for 1990. But his card with the Niagara Falls Rapids appears to have been his only card and no other references to him as a minor league trainer could be found.

But his card did include another detail of Rogaliner's baseball life: "His life isn't easy: Rogaliner is a die-hard Cleveland Indians fan!" 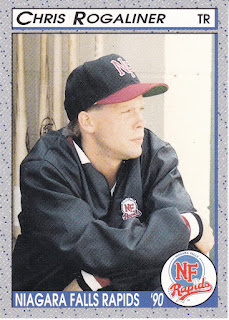