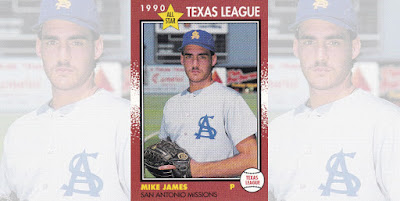 Originally published Dec. 22, 2018
Mike James broke through into the majors with the Angels, but surgery, rehabs and maybe a little bit of his unusual, surfer personality led to James' release in 1999, The Los Angeles Times wrote.

He soon signed on with a new team, however, and his rehabs paid off as he helped the St. Louis Cardinals into the 2000 playoffs.

"If anyone had a complaint about my work, I don't know why," James told The Times in the midst of that 2000 playoff run. "But everything I'm doing with the Cardinals tastes that much sweeter and better because of what happened with the Angels. I hope they're watching now."

James returned from his arm troubles to pitch in 51 games for the Cardinals that year, including four appearances in the 2000 National League Championship Series. He continued pitching in two more seasons after that, rounding out a seven-season major league career.

James' career began in 1987, taken by the Dodgers in the 43rd round of the draft out of Wallace Community College in Alabama.

James started with the Dodgers at rookie Great Falls. He went 7-1 on the year with a 3.76 ERA. In August, he pitched into the seventh inning of a win against Salt Lake and didn't give up a hit until the fourth, according to The Deseret News.

"I didn't really think about it," James told The News of his hot start, "until the umpire told me it was the first hit."

James moved to single-A Bakersfield for 1989, then AA San Antonio for 1990. He made AAA Albuquerque for 1991, but he never made the Dodgers. He continued in the Dodgers system through 1993, when he was traded to the Angels.

That August, he merited a feature in The Times where the wrote of his off-field focus, surfing.

"I try to surf around my pitching," James told The Times. "If I don't pitch, I don't get up early the next morning to surf. I do skate board about every day, but I've toned that down. Basically, I go out and kick around." 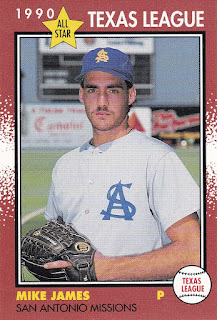