Anthony Brown grew up a Pirates fan, then played in organization for three seasons

Anthony Brown grew up in Connellsville, Pa., about an hour and a half southeast of Pittsburgh, so it makes sense that he grew up a Pirates fan.

The Pirates were his favorite team and his favorite player was Pirates legend Willie Stargell, according to his Welland Pirates card back.

Brown went on from Connellsville to play in the pros, for those very same Pirates. His pro career lasted three seasons. He made single-A, but didn't make it higher.

Brown's career began in 1989, signed by the Pirates as a free agent out of Connellsville. (Baseball Reference and The Baseball Cube have him down as from California, but Brown's three cards, his Welland card and two from 1991 at Augusta show him as from Connellsville.)

Brown started with the Pirates in 1989 in the rookie Gulf Coast League. He got into 22 games and hit .294. He also stole six bases and knocked in 11. He played both outfield and shortstop.

Brown moved to short-season Welland for 1990. He got into 59 games there as an outfielder. He hit .247, with 20 RBI and another six stolen bases. 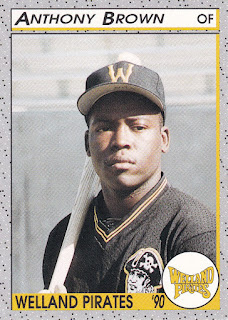