Jon Martin played three pro seasons, then had to give up on his dream 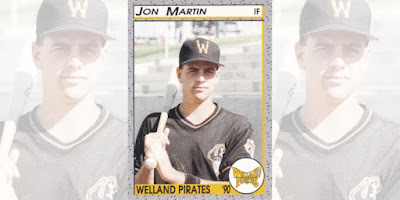 Jon Martin described his final day as a pro to The Los Angeles Times in April 1991: He seemed to be back from elbow surgery and had hit well that spring, but the Pirates no longer had room for him, he was told.

Martin then called his father with the news and cried, he told The Times.

"It's hard to have someone tell you you can't do what you love any more," Martin told The Times. "It's hard to give up a dream."

For Martin, the end came after three seasons. He played two of those in rookie ball and the other at short-season. He never made single-A.

Martin's career began in 1988, taken by the Pirates in the 10th round of the draft out of Golden West College.

At Golden West, Martin hit a three-run home run in a March 1988 win.

Martin started with the Pirates in the rookie Gulf Coast League. He saw 16 games and hit .309. He then returned for 1989, but saw a single game due to his injury. He went 2 for 4.

That spring and summer of 1989 also saw Martin right there as the Pirates discovered teammate and fellow fielder Tim Wakefield's knuckleball, Wakefield recalled in a book later. As the two played catch, Wakefield mixed in a knuckleball and Martin struggled to catch it.

"Unbeknownst to either of them, Woody Huyke was stealthily standing by, watching with more than amusement, his curiosity piqued," Wakefield wrote in "Knuckler: My Life with Baseball's Most Confounding Pitch."

Wakefield soon turned pitcher and had a lengthy major league career. Martin returned for one more season, 1990, with short-season Welland. He got into 44 games that year and hit .181 to mark his last season as a pro. 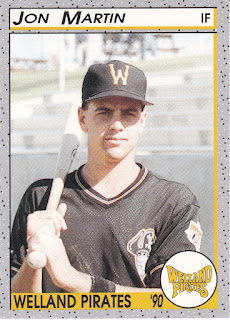