When Elvin Paulino hit, he improved those around him, specifically the guy batting in front of him, Paulino's manager at Winston-Salem manager Brad Mills told The Newport News Daily Press in July 1990.

Mills specifically spoke of Paulino teammate Billy White, according to The Daily Press.

Paulino hit .262 that year at Winston-Salem with 14 home runs. That season marked his fourth as a pro. He went on to play in two more. He made AAA, but not the bigs.

Paulino's career began in 1987, signed by the Cubs as a free agent out of his native Dominican Republic.

Paulino started with the Cubs that year between single-A Peoria and rookie Wytheville. He hit .205 in 49 games at Peoria, but .314 in 55 games at Wytheville. He knocked in a run on a bases-loaded ground out with Peoria in June.

Paulino arrived at high-A Winston-Salem for 1990. By June, Paulino was hitting .281 and had nine home runs and The Daily Press wrote he was impressing Cubs' brass.

His final season came in 1992 as he split time between Charlotte and AAA Iowa. He hit a home run in a spring game. He tripled and scored in a June game with Iowa. He hit .221 overall, with five home runs to end his career. 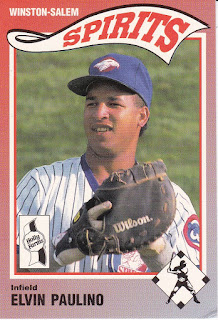