Bill Harford helped build the Cubs as farm director and later built teams as a scout; Passed in 2016

Pittsfield, Mass., had a brief, four-year life as a AA city in the 1980s and Cubs farm director Bill Harford had a big role in the teams' success, The Berkshire Eagle's Howard Herman recalled years later.

"That team had one future Hall of Famer in Greg Maddux, All-Stars in Jamie Moyer and Rafael Palmeiro," Herman wrote in October 2016, "and 14 big league players in all. Had Palmeiro not been caught up in performance enhancing substance reports, he might also have had a ticket punched for Cooperstown."

Harford joined the Cubs right out of school and later went on from his role as farm director to become a scout.

Herman's reminiscing in 2016, however, marked Harford's passing at the age of 61 after a short battle with cancer.

Harford's career in baseball began in 1979, hired by the Cubs a year after he graduated from Franklin & Marshall College in Pennsylvania.

Harford joined the Cubs after playing some in college. He was a middle infielder for Franklin & Marshall teams coached by former Tiger Don Wert.

With the Cubs, Harford made farm director in charge of the organization's minor league operations by 1986. His 1990 season marked his fifth season in that role and the Peoria Chiefs, the Cubs' single-A affiliate, saw fit to include him in their team set.

That August, he spoke to The Arlington Heights Daily Herald about moving former top Cubs pick Ty Griffin to a better situation, back at high-A Winston-Salem, from AA Charlotte.

"He wasn't having the success that we felt he should have been having so we wanted him to start fresh," Harford told The Daily Herald. "We felt there might be too many things bothering him."

Harford stayed on as farm director into 1992, when he was fired to make way for someone else,  He returned two years later under Andy MacPhail as a scout.

Harford went on to scout for multiple teams while based in the Chicago area, including the Cubs and the Twins, his obituary reads.

"Words cannot do justice to the depth of respect, admiration and love he garnered during his lifetime," his obituary reads. "His colleagues, friends, family and children agree the world lost a special individual." 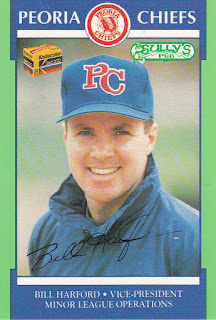