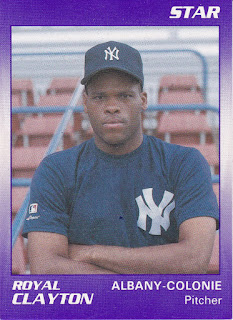 Royal Clayton took a no-hitter into the sixth for the AA Albany-Colonie Yankees in August 1989. The bid didn't work out, but it was a performance his manager Buck Showalter told The Schenectady Gazette showed Clayton's professional approach to the game.

"Royal Clayton is a very well-kept secret," Showalter told The Gazette after that game. "I think he has as good a chance to pitch in the big leagues as anyone here. Just because he doesn't have a trick pitch, or throw 100 miles an hour, some people think he's just another guy."

While Clayton did well in that game, and the year, going 16-4, he didn't get his chance to pitch in the big leagues.

Later, though, he did get to help mold young pitchers to get them to the big leagues, including helping the Diamondbacks' Brandon Webb on his way to the bigs.

Clayton's career began in 1987, taken by the Yankees in the 18th round out of the University of California-Riverside. He played that year at rookie ball, short-season Oneonta and single-A Fort Lauderdale. Between the three levels, he pitched 51.2 innings with an ERA of 4.18.

Going into 1988, Clayton's younger brother and future major leaguer Royce Clayton, still in high school, talked about his relationship with his brother to The Los Angeles Times.

"He's had a tough time in the minors," Royce Clayton told The Times that April. "He's stuck it out even though he hasn't gotten his shot yet. But he's always helped me out and I've always looked up to him."

But that tough time turned a little better that year in 1988. Royal Clayton split the season between Fort Lauderdale and single-A Prince William. He went 9-7, with a 2.07 ERA on the year.

"I'm a ground ball pitcher, and a couple of them got through in the ninth," Clayton told The Gazette. "But if I make a bad pitch, and they hit it, I can't do anything about it."

Clayton pitched briefly in 1995 and 1996 in the Giants and Orioles organizations, before ending his playing career in 1997 with independent Lubbock.

"That's going to be a good pitch for you," Clayton told Webb, The Magazine wrote. "When we go to spring training next year, we're going to work on that."