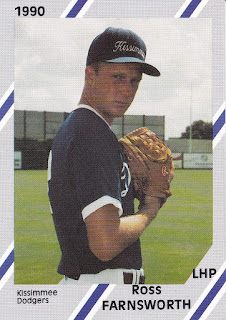 Great Falls hurler Ross Farnsworth pitched into the middle Game 2 of the 1991 Pioneer League championship series and he pitched well, but he just threw too many pitches, according to The Deseret News.

"We're still here to develop the kids," Hoffman explained to The News after Great Falls went on to lose the close game to Salt Lake.

Farnsworth pitched in that game to close out his second season as a pro. He went on to play in five more, though just one more in affiliated ball. He never developed enough to make AA.

Farnsworth's career began in 1990, taken by the Dodgers in the 41st round of the 1989 draft out of Pinole Valley High School in California.

The Dodgers selected Farnsworth after he won All-East Bay honors for 1989 at Pinole.

Farnsworth started with the Dodgers in the rookie Gulf Coast League in 1990, at Kissimmee. He got into 12 games, starting seven. He went 3-2, with a 2.60 ERA.

He moved to Great Falls for 1991. He gave up five hits and one run in a June win. He then took his fourth win in July, getting past some early troubles to record it. He went 8-3, with a 3.09 ERA on the season.

Farnsworth made high-A Bakersfield for 1992. He struck out five and gave up one earned run in a May victory. His total 4-4 record and 5.17 ERA marked his final season in affiliated ball.

Farnsworth moved to independent Sioux Falls for 1993 and stayed there two seasons. He went 5-4 there his first year and 3-5 his second.