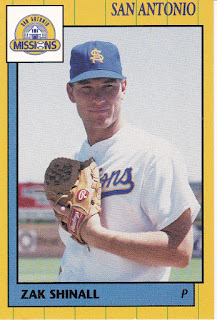 The Dodgers had some bullpen issues in July 1991 but team brass seemed to not see AAA reliever Zak Shinall as the possible solution, according to The Los Angeles Times.

Shinall seemed to understand, pointing to another player as the immediate possibility. At the same time, though, he knew he would continue to work, he told The Times.

"I would be ready for the job if they promoted me," Shinall told The Times. "All that I can do now is get people out. Once I prove I can do that on a consistent basis and start dominating this league, I'll get my chance in the majors. They'll have to make a move."

Shinall's career began in 1987, taken by the Dodgers in the 29th round of the draft out of El Camino College in California.

Shinall started with the Dodgers in the rookie Gulf Coast League and at rookie Great Falls. He moved to single-A Bakersfield for 1988, where he went 7-8, with a 4.22 ERA.

That August, he gave up a home run in Las Vegas that smashed part of the scoreboard, sending off sparks like in "The Natural."

"He didn't miss much of it," Shinall, who still got the win, told The Times later. "It was the longest home run I've ever given up, and I don't give up many home runs."

The Dodgers traded Shinall that December to the Indians. The Indians then placed him on waivers the next April, after he gave up four earned over two outs at AAA Charlotte. The Mariners selected him.

Shinall made his major league debut shortly afterward, on May 12. Shinall came on in the third inning of a game against the White Sox. He went 2.2 innings and gave up one earned run. Those stats proved the extent of his big league career.