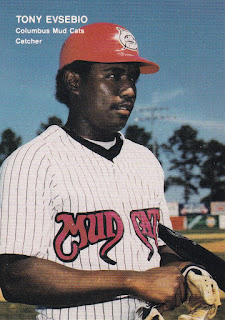 Tony Eusebio looked hit all the way in this June 1998 game, according to The Associated Press.

The result, according to The AP: A late two-run single that helped his Astros to a 4-3 win.

"In that situation, you hit anything that's around the plate," Eusebio told The AP. "You have an advantage. He might try to throw the fastball early. You don't let one get by and said, 'Hey, that's the one that I wanted.'"

Eusebio ended up hitting in nine major league seasons. In 2000, it seemed he didn't stop hitting. The catcher amassed a 24-game hitting streak over 51 days, then a franchise record.

Eusebio's career began in 1985, signed by the Astros as an amateur free agent out of his native Dominican Republic. His name was misspelled on his Best card Tony Evsebio.

He hit two home runs in a June 1994 game, helping his team to a win againstt he Giants. He then picked up four hits and four RBI in a July 1994 game against the Cardinals.

In April 1998, though, he played and hit the game-winning double in the ninth on an outside pitch, according to The AP.

"It was a good pitch for me, I like it out there," Eusebio told The AP afterward.

Eusebio got into 103 games in 1999, then 74 in 2000. His 2000 campaign also saw that hitting streak. He picked up his 23rd-consecutive game with a hit in late-August, hitting a double in Montreal to tie the club record.

''I didn't know the record streak for the Astros was 23 games,'' Eusebio told The AP afterward. ''When you play the game, you don't pay too much mind to it."