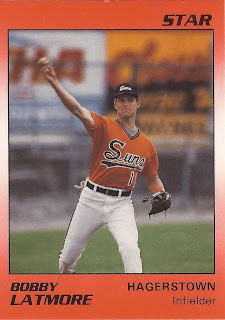 The high school football contest was in its fourth year in 2012 and it had become the go-to event for high school stars in northern Florida and southern Georgia.

"It got to the point where we had to go out and beg kids to play when we started out the first couple of years," Latmore, president of Varsity Sports, told The Herald. "Now, it's unfortunate, we're having to turn kids away that want to play in this game."

Latmore's promotion of the event was a continuation of a long career involved in sports, and one that included a six-year stint in minor league baseball.

Latmore's career in sports began in 1985, taken by the Orioles in the second round of January secondary draft out of Indian River Community College and the University of Georgia. Latmore went to Indian River out of DeLand High School in DeLand, Fla.

With the Orioles, Latmore played his first year largely at rookie Bluefield, hitting .258 in 59 games. For 1986, he moved to single-A Miami, hitting .242.

Latmore returned to Miami in 1987, also getting a brief look at AA Charlotte. For 1988, Latmore moved to single-A Hagerstown, the infielder hitting .245 on the year. That July, Latmore had both RBIs in a 2-1 Hagerstown win.