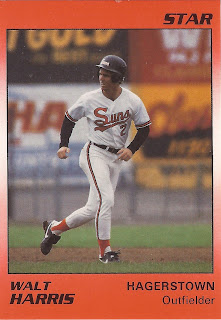 Going for his second no-hitter in as many weeks in 1986, Doug Cinnella thought he'd lost it, Cinnella told MiLB.com years later.

"About the fifth inning of the second no-hit game, I threw a change-up to Ed Whited, whom I had played against when he was at Rider [College]," Cinnella told MiLB of that 1986 game for short-season Newark. "He hit the ball to left field and I'm thinking, 'There goes the no-hitter,' but Walt Harris made a pretty extraordinary catch."

With that catch, Harris saved Cinnella's no-hitter. Harris later, at least briefly, worked to prevent catches - in a different sport. Harris played minor league baseball and three games in the National Football League as a defensive back. He never made the majors.

Harris' baseball career began in 1986, taken by the Orioles in the 12th round of the draft out of Stanford University.

Harris started with the Orioles at Newark. He hit .269 in 55 games. He knocked in the game-winner in a July game on a single.

He then turned back to football. He played that fall back at Stanford. He then signed on with the Chargers. He played in those three games.

"I had no glory moments, but I know personally that I played well," Harris told The Rochester Democrat and Chronicle later of his time with the Chargers.

Harris returned to the baseball field and to the Orioles for 1988. He played that year at single-A Hagerstown. He hit .272 over 127 games. He picked up two hits in a June game.