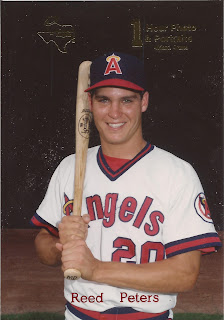 At the ceremony, Peters pointed to the rings as being the symbol of just what exactly his players accomplished, The Stockton Record wrote.

"When you actually get the ring, it solidifies what you did," Peters told The Record. "It's very difficult (to win the title), but we got hot at the right time."

Peters' players at Delta got something that Peters never got in his seven-season professional career.

A former member of the Angels and Giants systems, Peters never won a championship in the minors. He also never made the majors.

His playing career over, Peters has gone on to a long career in coaching, one that's taken him from UNLV to Air Force to Delta in California.

Peters' professional career began in 1987, taken in the 12th round of the draft by the Angels out of UNLV.

At UNLV, Peters spent the summer of 1986 in Alaska, playing for the Mat-Su Miners. With the Miners, Peters picked up three hits in on July game. He also hit three home runs in one three-game stretch that month.

After a winter playing in the Dominican Republic, Peters' career ended, never getting called up to the majors.

Peters' coaching career then began, back at UNLV, serving as an assistant coach during his final seasons in the minors. His head coaching career began Colby Community College in Kansas in 1995, winning the regional championship in his first season.

Peters moved on to Air Force in 1999, winning conference Coach of the Year honors in 2002. But, by 2003, Peters was headed back to California, to coach at Feather River College. He arrived at Delta and entered his fifth season there in 2012. He continues at Delta in 2018.

Looking ahead to his 2012 season, and the prospect of defending Delta's state championship, Peters told The Record that prospect was a good one.

"Winning the championship has helped recruiting," Peters told The Record. "We have the potential to be better offensively and defensively than we were last year.