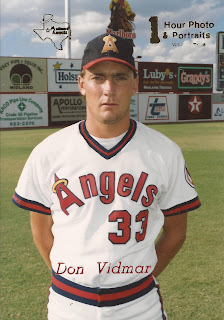 Don Vidmar's Palm Springs Angels did their part in this April 1991 game - they scored. Vidmar just went to work.

By the time this front end of the day's double header was done, Vidmar had himself a no-hitter. He struck out three and walked two, no-hitting rival Bakersfield over the seven-inning contest.

Vidmar threw that no-hitter in his third professional season. He went on to play in five. He made it to AAA, but not the majors.

Vidmar's career began in 1988, taken by the Angels in the 35th round of the draft out of Grand Canyon University.

Vidmar played his first season at short-season Bend. He got4 into 25 games, starting five. He had a 2.08 ERA. By late August, Vidmar's 2.04 ERA was the league's lowest. By the end of the season, The Bulletin had him as among the players who were capable of making the bigs.

He played most of 1991 back at Midland, improving to 13-5 over 22 starts there. He also started the year back at Palm Springs and threw that no-hitter.