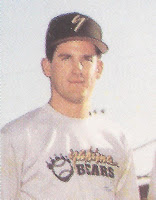 Faurot did so by knocking a double deep over the left fielder's head, plating two, according to The Times.

"He was playing me the same way every team does," Faurot told The Times. "I'm a pull hitter, but I got an outside pitch, made good contact and got a lucky break."

Faurot apparently went on from Diamond Bar to Cal-Poly Pomona and to a brief career as a trainer before going on to other pursuits. 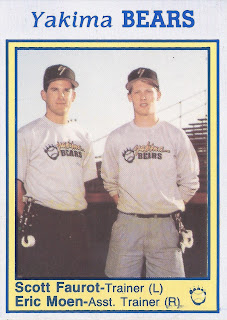 According to his Yakima card, Fauro attended Pomona and served as a student trainer in 1986 and 1987. He's credited as serving as a trainer with the Los Angeles Rams in 1989 before joining the Dodgers at Yakima for 1990.

(His card also included a joke about his training particulars, that he taped right and cut left.)