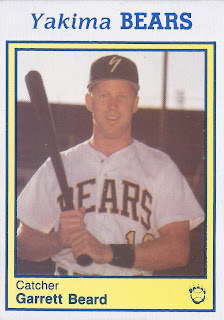 Garrett Beard came out of the Pittsburgh-area Pine Hills High School and eventually turned pro. He recalled to The Pittsburgh Post-Gazette in 1989, as he made his first professional stop, his disbelief at arriving in the minors.

"It was hard for me to think when I was back at Penn Hills that I would be doing something like this now," Beard told The Post-Gazette. "But it's always been my goal to play pro ball and I'm having so much fun now. It's a great experience and something I always wanted."

Beard experienced the pros that year and over the next six seasons. He made it up to AAA, but he never got to experience the majors.

Beard's career started that year as the Dodgers took him in the 47th round of the draft out of Spartanburg Methodist College.

Beard started with the Dodgers at short-season Salem. He hit .241 in 75 games. He hit six home runs and 54 RBI. He returned to the Northwest for 1990, at Yakima. He went 3 for 3, with a two-run shot in a June game. He also saw time at high-A Vero Beach and Bakersfield. He hit .266 overall.

That spring, the Dodgers switched the infielder to catcher, The Post-Gazette wrote.

"We feel catcher is where he has the best chance to make it to the major leagues," Dodgers minor league operations director Charlie Blaney told The Post-Gazette. "He has a strong arm and he's a very aggressive player."