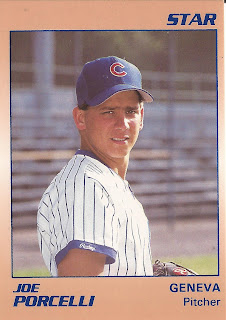 This game certainly wasn't what caught the Cubs' attention. For Joe Porcelli, it was just a bad start against one of the top teams in the country.

But, pitching in March 1990 in a baseball tournament in Hawaii for Iona College, Porcelli walked the first two Oklahoma State batters he faced, according to The Associated Press. His Iona Gaels went on to lose to the No. 5 Cowboys 16-2.

The Cubs saw enough of Porcelli in other outings to select him that June in the 15th round of the draft. Porcelli, though, couldn't turn that into a long pro career.

Porcelli's career began that year with his selection out of Iona. He played his first year at short-season Geneva. At Geneva, Porcelli went 3-2, mostly in relief. In 31 total outings, he posted an ERA of 4.57.

Porcelli moved up to high-A Winston-Salem for 1991, getting 41 relief outings, picking up a single loss and a single save. His ERA came in at 4.53. It was his final year in the Cubs' system.

Porcelli is recorded as returning to the field three years later, with six outings for independent Tyler. Those six outings consisted of four starts and two relief appearances. His ERA topped 9.31, finally ending his career.