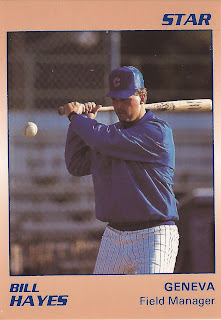 Daytona manager Bill Hayes was frustrated. He'd just watched his team lose 4 to 3 in July 1993 in a game they should have won, according to The Daytona Beach News-Journal.

"Three unearned runs. That's what killed us," Hayes told The News-Journal. "That's the frustrating part - watching us beat ourselves."

Hayes had been around long enough to know how frustrating that could really be. He was managing in his sixth season with the Cubs system that year. That came after a 10-season professional playing career, one that saw him make the bigs for five games over two seasons.

And Hayes continues in the game today, though he's switched to a different role and different team, one as bullpen catcher for the San Francisco Giants.

Hayes' career in baseball began in 1978, taken by the Cubs in the first round of the draft, out of Indiana State University.

With the Cubs, Hayes started at single-A Pompano Beach, moving to AA Midland in 1979. In 1980, he made AAA Wichita. He also made Chicago.

In Chicago, Hayes debuted Sept. 30, getting into four games to finish the season. He picked up two hits in nine at bats, including a double. In 1981, he returned to Chicago for one final game, not getting another at bat.

Hayes played the rest of 1981 at AAA Iowa, as well as five of the next six seasons. The only season he didn't play at Iowa, he spent at AAA Omaha with the Royals. He never made it back to the bigs.

After Hayes retired from playing, he jumped into managing. In 1988, he took the helm of the short-season Geneva Cubs, a job he held for three seasons.

He stayed with the Cubs system through 1993, jumping to the Rockies and the managerial spot at high-A Central Valley in 1994. By 1996, Hayes was managing at AA New Haven.

"It's taken me a while to get out of Single A," Hayes told The Hartford Courant as he started his first AA season as a manager. "Everyone wants to climb that ladder. I did it as a player. Now as a manager, like every other manager, you aspire to get to the bigger levels."

Hayes stayed at New Haven for two seasons. In 1998, Hayes returned to the majors, this time as bullpen coach in Colorado. He then returned to managing for 1999 at AAA Colorado Springs.

After a move to the Giants system, Hayes managed in the minors for three more seasons. He then found a home in San Francisco in 2003 as bullpen catcher. He remains there for 2013.

As bullpen catcher, Hayes also works with the young catchers. In March 2013, he worked with young catcher Andrew Susac.

"There's a few things he needs to do just to quiet down the way he receives the ball," Hayes told The Sacramento Bee of Susac. "But he's got good hands. He's got an above-average arm. All things said, that just takes games played."