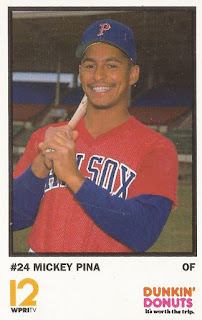 Coming off his second professional season, Mickey Pina saw himself working his way through the minors, and making the majors.

"I feel I'm a major league player," Pina told The Quincey Patriot Ledger in December 1988. "I have that kind of ability. I study the game a lot and I'm always talking about it."

While he may have had the ability, Pina never got to show it in the bigs. Pina's career spanned six seasons, making it as high as AAA, but he never made the majors.

Pina's career began in 1987, signed by the Red Sox as an amateur free agent out of Eckerd College. He started that first year at short-season Elmira, hitting .267 with 12 home runs.

Also at Pawtucket, Pina earned the praise of his manager, Ed Nottle. Years later, talking to The Greatest 21 Days in August 2011 about his former Pawtucket players, Nottle recalled Pina's work-ethic.

"Mickey Pina worked too hard," Nottle, a coach for 2011 at independent Brockton, told The Greatest 21 Days. "What a great kid. He'd take 50 minutes extra hitting, he'd take so much stuff, it was unbelievable."

"Even though I didn't see it go out, I was happy rounding the bases," Pina told reporters. "It was exciting with all the guys coming up an congratulating me in the dugout."

Starting the season, though, Pina was back at Pawtucket. He also had a tough year. He hit just .223 with nine home runs. By May, he was hitting just .167, The Newport News Daily Press wrote.

"I think I have been pressing a little bit," Pina explained to The Daily Press after a game-winning May 1 hit. "But when you hit the ball the way I have in the past, you just try to play out of it the best you can."

Come spring 1991, Pina was again back at work, trying to make the Red Sox, and shake off his poor season from 1990. He hit a two-run home run in a mid-March game.

"The important thing is that I feel good, I'm swinging the bat pretty good, running good and and throwing and hitting cutoff men like I'm supposed to, doing the little things," Pina told The Patriot Ledger News Service. "When I get the at bats, I'm trying to be aggressive."

Pina, though, didn't get many more at bats. He played 1991 back at Pawtucket, his average going down further, to .208.

He's not recorded as playing in 1992. In 1993, he got into 14 more games with Rochester of the independent Northern League.