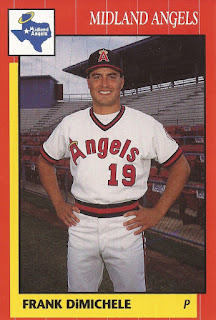 Fresh off a season where he saw four outings in the majors, Frank DiMichele vowed to get back, according to The Los Angeles Times.

"I'm going to show what Frank DiMichele is made of," DiMichele told The Times in August 1989. "I had a taste (of the majors). Now I know what it takes."

Despite his brief stint in the majors the previous year, DMichele played 1989 back at AA. He played two more seasons after that, but those four big league outings proved to be the entire make up of his big league career. He didn't get back.

DiMichele's career began in 1985, taken by the Angels in the 15th round out of Community College of Philadelphia.

He started with the Angels at short-season Salem. He got into nine games, starting eight. He went 1-5, with a 5.83 ERA. He left an early August game with a sore elbow.

Invited to spring training 1988, the lefty DiMichele caught some eyes immediately. Among those eyes was Angels manager Gene Mauch, according to The Times.

"If DiMichele sneaks in there, what'd be wrong with that?" Mauch told The Times. "I don't know what's he's going to do, but he's definitely got my attention."

DiMichele took advantage. He waited until March 24 to give up his first run and pitched well enough to earn the title "hotshot rookie." He was also counted among the leading candidates for a roster spot.

Not having played above single-A, DiMichele made the team. He debuted April 8. He got into four games in all and gave up five earned in 4.2 innings if relief.

He played the rest of that year at AAA Edmonton and AA Midland. He then returned to Midland for all of 1989.

In 1990, he started at Midland and then moved to the Padres at AA Wichita. He then finished out his career with 22 relief outings at AA Reading in 1991.

DiMichele has since returned home to Pennsylvania. He spent time as a coach and head coach at LaSalle University. More recently, he teaches pitching through ThePitchingPro.com in Norristown, Pa.
1990 Minor League Tally
Players/Coaches Featured: 2,762
Made the Majors:1,057-38.3%-X
Never Made Majors:1,705-61.7%
5+ Seasons in the Majors: 441
10+ Seasons in the Minors:264
Posted by Steve78 at 4:08 PM