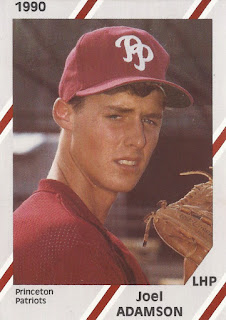 Pressed into the starters role in this August 1997 game, reliever Joel Adamson showed what he could do, according to The Associated Press.

He gave up four hits, two runs in six innings of work, The AP wrote. He also recorded the win.

"It's something you can't think about. You just have to think that you're getting another opportunity to start," Adamson told The AP afterward of the surprise call. "Every time they give me an opportunity to prove myself I'm grateful for the chance "

Adamson proved himself enough to make the majors for the first time the year before. His call up to the Marlins in 1996 proved a missed call the year before was no fluke. He also had to prove himself with his teammates, according to The South Florida Sun-Sentinel.

Adamson's career began in 1990, taken by the Phillies in the seventh round of the draft out of Cerritos College in California.

Adamson started with the Phillies at rookie Princeton. He made high-A Clearwater in 1991 and AA Reading in 1992.

For 1993, he moved to the Marlins in a trade. He played that year largely at high-A High Desert. But he also saw time at AAA Edmonton. With High Desert that June, he threw a complete-game shutout to clinch the first-half title for the team.

"I wasn't even thinking about that," Adamson told The San Bernardino County Sun after the High Desert win. "I just wanted to take care of winning; take care of business."

Adamson played 1994 back at AA and 1995 at AAA Charlotte. In May 1995, he missed a call up to Florida when he couldn't be reached and the team GM changed his mind, The Sun-Sentinel wrote.

When he made the Marlins the next year, he also had to explain his spring in 1995. He played in replacement games. His explanation included his refusal to play in regular-season games and return to minor league camp, The Sun-Sentinel wrote.

"I lived through a lot of pain in my heart last year," Adamson told The Sun-Sentinel of both.

Adamson got into nine games in relief for the Marlins in 1996. He gave up nine earned in 11 innings of work.