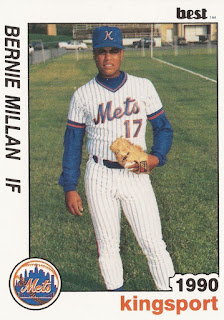 The Stockton Ports looked to make a run in 1994 and infielder Bernie Millan did his part.

In one July win, Millan picked up four hits, including a run-scoring triple, The Stockton Record wrote.

"Hopefully well get on a good streak now and get ourselves back in the race for the second half," Millan told The Record afterward.

Millan stretch run with single-A Stockton that year came in his fifth season as a pro. That season turned out to be his final full year. He made AA briefly the next season, but he made it no higher.

Millan's career began in 1990, signed by the Mets as an undrafted free agent out of his native Puerto Rico.

Millan's life in baseball, however, began much earlier. His father, Felix Millan, played in 12 major league seasons, from 1966 to 1977, for the Braves and Mets.

In July 1977, the 6-year-old Bernie Millan saw an opposing player have some fun with him by switching out his dirty Mets hat with a clean Cubs hat.

His pro career began at rookie Kingsport. He got into 57 games and hit .311. He also knocked in 20. He played 1991 between single-A Columbia and short-season Pittsfield, hitting .261.