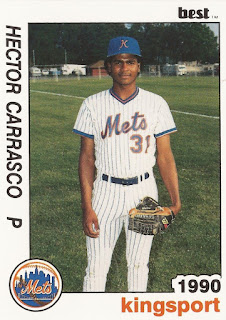 Hector Carrasco made the Reds to start 1994 and the reliever looked forward, according to The Cincinnati Enquirer.

Carrasco saved three games that spring and he looked to save more.

"I want to be a closer for my career," Carrasco told The Enquirer that April. "Come in for one inning, boom, get everybody out."

Carrasco ended up coming into a lot of innings in his career, spanning 12 big league seasons. He got into 647 major league games in that time, but he never became a closer. He saved a total of 19 games.

Carrasco's career began in 1988, signed by the Mets as a free agent out of his native Dominican Republic.

Carrasco started with the Mets in the rookie Gulf Coast League. He hit rookie Kingsport in 1989 and high-A Pittsfield in 1991. He moved to the Astros and single-A Asheville for 1992 and the Marlins at single-A Kane County in 1993.

Going into 2000, Carrasco thought he had another chance at being a closer as the Twins needed one, according to Knight Ridder Newspapers.

"That's what I want," Carrasco told Knight Ridder of being a closer. "If they give me the chance, I think I could be the closer."

He didn't become the team's closer, but he did get into a career-high 69 games on the year, including eight games played with the Red Sox after a trade.

That April, with the Twins, Carrasco gave up Cal Ripken's 3,000 hit, a single off a high fastball, The Associated Press wrote. "He hit the best I had," Carrasco told The AP afterward.

Carrasco returned to the Twins for 2001, then skipped 2002 and played 2003 with the Orioles. After another year out in 2004, he returned again to the Nationals.

"This is the first time my whole career I'm pitching the way I'm pitching right now," Carrasco told The Washington Post after a successful run down the stretch. "I'm surprising myself."