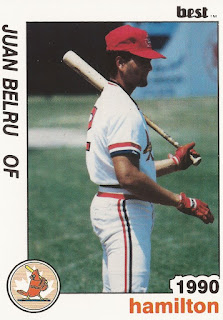 Juan Belbru went on a run at short-season Hamilton in 1990 that caught the notice of The St. Louis Post-Dispatch.

Belbru smacked nine home runs in 148 at bats, a pace noted in The Post-Dispatch that August.

Despite his run, Belbru's run in pro ball was about to end. That was his fourth season in the pros. It also marked his final season.

Belbru's career began in 1987, signed by the Cardinals as a free agent out of his native Puerto Rico. He has also been credited as Juan Belru.

Belbru started with the Cardinals with rookie Johnson City. He got into 23 games there, hitting .150 with one home run.