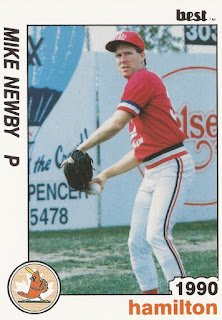 The University of San Diego baseball team took on some transfers for 1988, including pitcher Mike Newby, according to The Los Angeles Times.

The transfers had head coach John Cunningham looking forward to the year.

"I still think we have a good shot at being quite successful this season," Cunningham told The Times. "On paper, we have the makings of a pretty fine team."

Newby went on from San Diego to turn pro. His pro career, however, turned out to be brief. He played a single season.

Newby's career began and ended in 1990, signed by the Cardinals as an undrafted free agent out of San Diego.

Newby's college career started at Mt. San Jacinto College. He then moved to San Diego for 1988. He came on in relief and helped preserve an April 1988 win. In another game that month, Newby shut down opposing hitters for four innings on two hits.