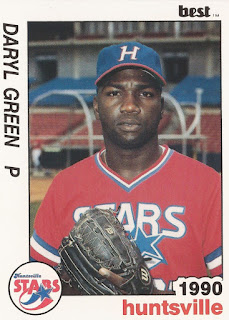 "The thing they all have told me is he's one of the few prospects improving," Reyes told The Daily News of Green. "The other thing they like is he's a competitor. He's able to reach back and find that little extra."

The Angels liked what they saw in Green and took him late in the first round of the 1986 draft. Green, however, never lived up to those early expectations. He played six professional seasons. He never made AAA.

Green's pro career started that year in 1986, taken by the Angels 28th overall in the draft out of Nacogdoches.

Green arrived in the Athletics system for 1989, playing that year at single-A Modesto. He also turned reliever, getting into 39 games, starting 11. He went 3-6 overall, with a 3.10 ERA. He also saved 13 games, including one in a June game.

Green played 1990 between three different teams, Modesto, AA Huntsville and unaffiliated Reno. He got into 13 relief outings at Huntsville, turning in a 6.41 ERA.