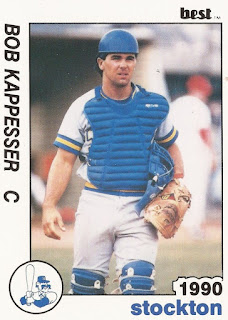 Bob Kappesser did well in this spring training. He hit for average and he knew how to move the runner over, according to The Milwaukee Journal.

"That's something that I've done my whole career," Kappesser told The Journal. "I've worked on that. I don't come out in BP and try to hit home runs because I know I'm not going to do it in the game. I've accepted that role."

Kappesser spoke to The Journal near the end of his career. He spoke to the paper in spring 1995 as he played for the replacement Brewers.

Overall, Kappesser played seven seasons as a pro. He made AAA in two of those seasons, but he never made the majors.

Kappesser career began in 1989, signed by the Brewers as a free agent out of the University of North Florida. Kappesser went to North Florida out of Auburn, NY.

Kappesser played two seasons at North Florida. He hit .279 his first year and .350 his second. In between, he played for his hometown summer collegiate team, Auburn Pepsi Cola. He picked up a hit in a July 1988 game for Auburn.

With the Brewers, Kappesser started at rookie Helena. The catcher hit .139 over 32 games. He moved to high-A Stockton and AA El Paso in 1990. He hit .191 overall that year.

Kappesser played 1991 back in the California League, between Stockton and Visalia. He then played all of 1992 at El Paso.

In 1992,  Kappesser did something he hadn't done to that point - hit a home run. He had four total home runs over his seven seasons.

Then came spring 1995. Kappesser played and he did well. He went 2 for 2 and threw out two runners in one early game. By the time it was over, though, Kappesser was ready to throw away his hat. In fact, he did, according to The Journal.

Still, he returned for one more season at El Paso. He got into 61 games and hit .191, ending his career.