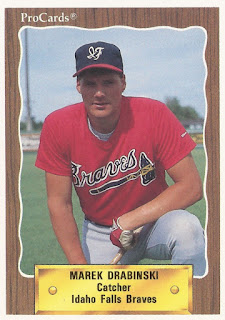 Heading up the local American Legion team in the summer of 2015, former Brown University head coach Marek Drabinski explained to The Norwich Bulletin his coaching style and his approach to interacting with his players.

Drabinski's style, he told The Bulletin, includes being demanding of his players - because he expects a lot out of them.

"I tell them, 'If I don't get on you, then I've turned it in and I don't care anymore,'" Drabinski told The Bulletin. "'As long as I think that you have ability and potential, I'm going to stay on you, because I expect it from you and you have to expect it from yourself.' "

Drabinski served nearly two decades as head coach at Brown, until leaving in 2014. Drabinski turned to coaching after a brief career as a player himself. He played two seasons as a pro. He made single-A, but didn't make it higher.

Drabinski's career in baseball began in 1990, signed by the Braves as a free agent out of the University of Connecticut.

Drabinski started with the Braves at rookie Idaho Falls. He got into 52 games as a catcher, hitting .265 and knocking in 14. He recorded 24 putouts in a game that July, a Pioneer League record.

In another July 1990 game, Drabinski scored twice and helped his team to its seventh-straight win, according to The Deseret News.

"I think we might have surprised these guys," Drabinski told The News afterward. "We've got a tight bunch, it's all come together, and we're playing well every night."

Drabinski moved to single-A Macon for 1991, seeing time in 45 games. He hit .167, marking the end of his playing career.

Drabinski soon went into coaching, first serving as an assistant coach at Connecticut for three years and then arrived at Brown as head coach in 1996.

He stayed at Brown for 18 seasons. He got the team winning again in 1999, leading it to its first winning season in a decade. His team then won the Ivy League championship in 2007, with 27 wins on the year. His tenure with the school ended in 2014, when he resigned mid-season.

In 2000, one of Drabinski's early recruits, Dan Kantrovitz, recalled to the alumni magazine first meeting Drabinski upon visiting the school.