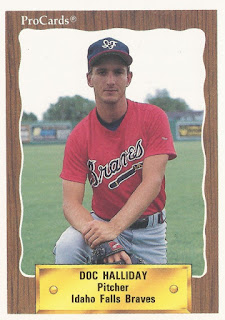 Allen Halliday threw his fourth complete game on of 1990 in this May game, helping pitch his University of Tennessee Volunteers to a win, according to The Jackson Clarion-Ledger.

Halliday struck out four Mississippi State batters, didn't walk one and gave up nine hits over the game to notch the 6-2 win, The Clarion-Ledger wrote.

Halliday went on from Tennessee to the pros. His pro career ended up amounting to one complete season. He spent that year at rookie Idaho Falls. He didn't get a second year.

Halliday's career began and ended that year in 1990, signed by the Braves as an undrafted free agent out of Tennessee. He's also credited by his nickname, Doc Halliday.

At Tennessee, Halliday recorded a total of six wins in 1990 to lead the team.

He also set a couple negative marks. Over his career there from 1988 to 1990, Halliday also recorded a total of 20 losses, still a school record. In a 1989 game against Ole Miss, Halliday gave up 15 hits in a game. The total set a Volunteer pitcher record, but a mark since eclipsed.