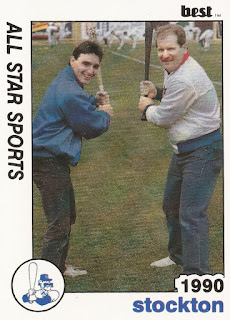 Mark Marino and Mike Conroy not only sponsored Stockton Ports cards, they got cards themselves.

Marino and Conroy owned All Star Sports in Stockton, the company that served as the team set sponsor for the California League's Ports for at least three years.

All Star Sports offered sports souvenirs and baseball cards, according to its on-card ad.

All Star Sports appeared on the back of Ports cards from 1988 to 1990, backing at least four sets for the team.

The two returned for 1989's ProCards and Star sets. Both had bats on those cards and appeared in their shop.

The All Star Batters Box appears to still be in operation in 2016, as a business by that name is listed on Monte Diablo Avenue. The Grider Way location appears in 2016 to be an indoor garden supply place. All Star Sports, however, appears to no longer be in business. 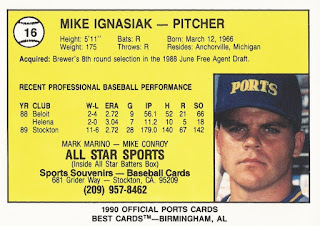