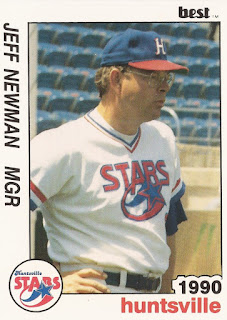 Jeff Newman's Huntsville Stars took this August 1990 game on a one-out, ninth-inning single, capping a somewhat frustrating day for the team, according to The Orlando Sentinel.

Huntsville out-hit Orlando 12 to 5 on the day, needing that 12th hit to seal the win, The Sentinel wrote.

"Timely hitting - that's what counts in the end," the Huntsville manager Newman told The Sentinel afterward. "We left a lot of men on base but got the big hit when we needed to."

Newman got a few big hits of his own in his time, having previously spent nearly a decade in the majors as a player. He's since returned to the majors as a base coach, helping direct runners around the base paths to capitalize on those big hits.

Newman's long career in baseball began in 1970, taken by the Indians in the 26th round of the draft out of Texas Christian University.

Newman started in the rookie Gulf Coast League. He made AA San Antonio in 1973, then AAA in 1974. After going through the Angels and Phillies systems, Newman arrived in Oakland for 1976.

He debuted in the majors late that June and stayed for 43 games. The catcher hit .195. He then became a regular for the Athletics, staying with the club through 1982.

In one May 1979 game, Newman took a foul tip off his Adam's apple and then stayed in the game to hit a home run, according to The Washington Post.

"I couldn't breathe there for a second," Newman told The Post later of the foul tip. "I felt for my Adam's apple and couldn't find it."

His playing career over, Newman soon turned to coaching. He also soon returned to the majors.

In 1986, he served as bullpen coach with the team that brought him to the majors, the Athletics. That June, Athletics manager Jackie Moore got fired and Newman took over as interim manager. He stayed on for 10 games, going 2-8, before Tony LaRussa took over.

In July 2005, Newman explained to The St. Petersburg Times the nuances of coaching at third - and the signs - and decoys - a third base coach has to give.