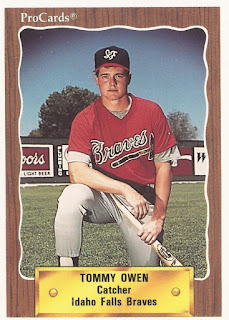 Tommy Owen helped his Georgia Bulldogs to the 1990 College World Series title. Years later, he recalled the experience to a local television station as the Bulldogs made another run.

"You still can remember the things that went on," Owen told WALB in June 2008, "the sights and the sounds. Who you played. The pitchers and the players you played against. What they did after that and the big leagues. It is exciting time."

Owen went on from Georgia to play in the pros. His run there, though, ended up being brief. Owen played two seasons, never making single-A.

Owen's career began that year in 1990, taken by the Braves in the 55th round of the draft out of Georgia.

On the way to the 1990 championship, Georgia fell in the conference tournament. The catcher Owen tried to prevent the tying run from scoring, by taking the throw on a bases-loaded infield grounder, but his foot wasn't on the plate.

With the Braves, Owen played his first season between the rookie Gulf Coast League and rookie Idaho Falls. Between them, he got into 16 games and hit .176.

Owen has since spent time as a state trooper and as a pilot dusting crops. In 2011, he served as baseball coach at Randolph Southern School in Georgia.