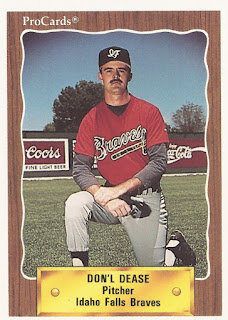 Don'l Dease struck out nearly a batter an inning in 1990 - in both college and in the pros.

He struck out 81 batters in 81.1 innings of work at Samford University, leading his club in the category.

Then, in the pros with the Braves, he sat down 55 batters on strikes in 58.2 innings of work at rookie Idaho Falls.

For all his strikeouts that year, Dease's career strikeout totals in the pros remained at 55. He pitched in that one season and didn't return for a second.

Dease's pro career began and ended that year in 1990, signed by the Braves as an undrafted free agent out of Samford.

At Samford, Dease threw seven complete games over his two seasons there. He put up a 4.20 ERA in 1990 and led his team in strikeouts.

With the Braves, Dease played his season at Idaho Falls. That July, he had a hand in a league pitching mark. He struck out 12 batters over his five innings of work. Added the reliever's total, Idaho Falls hurlers struck out 23 batters overall in the game.

Dease saw time in 13 games overall, starting each. He turned in a 4-2 record and a 2.91 ERA, marking the extent of his career.